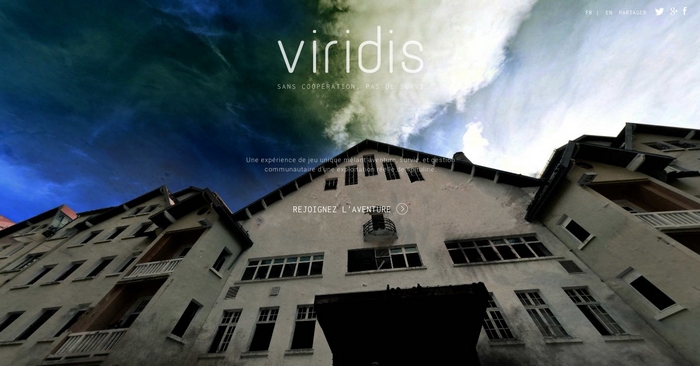 Viridis is a videogame but it is also a real spirulina farm and an installation. Viridis is a global project that relies on different modules, the main is an online video game, immersive, plus an installation made of spirulina bioreactors and a set of videos and sounds.

Viridis is a unique game experience combining adventure, survival, and an actual operating spirulina community management. Through the video game, the community can directly affect and interact with a real operating spirulina farm, managed by the artists. The Viridis context is set in a post-apocalyptic world, in which survivors owe their survival to the “green counterpoison”, the spirulina. The player is a “child of the afterworld” whose mission is to build a new farm for a future colony. He must therefore explore huge landscapes and abandoned territories to gather items and materials, assemble and reuse them to create the conditions for the production of spirulina.

Two years of preparation, from 2012 to 2014, have been necessary to Sandra and Gaspard Bébié-Valérian to preprare the project and make it ready as expected. A first prototype has been made, several installations (cf the Viridiarium) have been produced too.

By participating in the game, the player gets an access to the farm management. In the game, the players gain points they can invest in daily tasks or items, they can also vote in referendums as sort to decide the procedures for the good development of the spirulina. Spirulina is known for its health and nutritional benefits and used in humanitarian contexts. The Viridis farm is located in the southern Cévennes. It currently consists of a greenhouse with a tank where spirulina is cultivated, it works with solar energy and is equipped with sensors to monitor the health and production. However, if the game is still available online, the project was directly connected to the sumer season. Indeed, the spirulina grows with strong light and heat. That’s why the interconnection with the real farm was operational from june to october. Now the spirulina hibernates.

The Viridis players are both implicated in the cleaning and harvest processes, but also they are consulted to get feedbacks about the technical and energetic improvements. The players, as they wander and progress in the game, collect points which allow them to invest in specific real actions or even objects. Thanks to the points gained in the game, everyone involved in the daily tasks vote (referendums) decide the procedures for operating and interacting with farmers. Although the the game remains available on the internet, the project has a limited period of time. Indeed, the proper development of spirulina depends on the sun and heat, which is why the project in its interconnection with real farm took place from June to October 2014.

The spirulina farm is now in hibernation. This does not exclude, now and during the winter and fall seasons, to present spirulina bioreactors (like the Viridarium) as is the case with "Le Crassier".

While Viridis is an experience played from the internet, we are always keen to develop installations presented during exhibitions. Our main question is usually about the display of the spirulina, in an art gallery or a museum.
Thus, we developed a system that gathers objects, pictures, videos from Viridis and reconstituted in a specific space scenography. Here is a gallery of images representing the Viridis installation (Gamerz festival 2014, CCO, Villeurbanne 2014, ZO gallery, 2015).

How to invest your points in the real farm, explanations